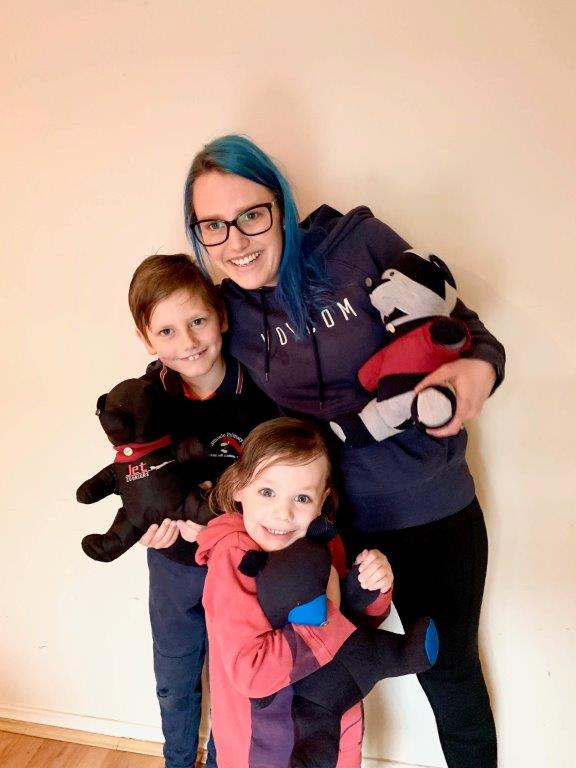 'They are a great comfort for the kids and they have something they can cuddle that reminds them of their Pop. They call them their Poppy Bears and whenever they are struggling and grieving, they give them a cuddle"

The death of a loved one can be one of the most difficult experiences people face. Grief and bereavement have many different faces and the emotions one feels are individual to the person experiencing them and no one person feels the same, copes the same or moves forward at the same pace.

At Palliative Care South East, our Bereavement Program supports carers and families after their loved one has died and, last year, we introduced a Memorabilia Program which offers individuals the opportunity to have a keepsake made from their loved one’s clothing or an article of significance.

A $1000 grant from Stockland CARE enabled us to train our volunteers and purchase equipment and materials to start making the memorabilia which includes cushions, teddy bears and patchwork doona covers that are cherished and bring fond memories to the relatives of their loved one.

“After my father-in-law passed away, we didn’t really have a keepsake other than clothes and a watch but not really anything personal especially for the kids,” Cara Thompson said.

“It was a difficult time for our children as their grandfather had lived with us for more than five years and, especially for our eldest, as for him he was also like a parental figure and he was always there.”

Thanks to the program, Cara and her husband had several teddy bears made out of one of her father-in-law, Neil Thompson’s, favourite jackets.

“They are a great comfort for the kids and they have something they can cuddle that reminds them of their Pop. They call them their Poppy Bears and whenever they are struggling and grieving, they give them a cuddle.”

She died in my arms

Richard and Frances Almond were happily married for almost 40 years before cancer separated them.

“When Francie went into hospital last year, she was diagnosed with stage four liver cancer on the Friday. We saw the oncologist on the Tuesday and he said she had one, maybe two or three weeks to live,” Richard said.

“He asked her whether she wanted to stay in hospital, go to a nursing home or a palliativce care unit but she told them she wanted to come home and die with me and she did. She died in my arms and she never suffered any pain,” he said.

Richard credits this to the tremendous care they received from our clinical team which enabled Frances to enjoy end-of-life care at home pain free and with her symptoms well managed.

“She lived another eight weeks, four days and 14 hours and never suffered any pain and that’s one thing I’m very grateful for as they did a tremendous job. To be honest, palliative care really excelled themselves,” he said.

After Frances’ death, Richard joined our bereavement program and participated in our memorabilia program.

“I’m really pleased with this program. I had a teddy and a cushion made from Francie’s dressing gown. I’ve put the first necklace I bought her around the teddy’s neck and clipped the brooch I bought her on our first holiday to Hong Kong on the front. People who see the teddy love it.,” Richard said.

Richard finds surrounding himself with photos and memorabilia of Frances is comforting and brings back good memories.

You can support people like Richard and Frances by donating to Palliative Care South East.  Fundraising and donations enable us to deliver innovative support programs in addition to our exceptional clinical care. Every dollar donated goes directly into our programs.

You can also help by sewing Memorabilia items or supporting our palliative clients through one of our other volunteer programs.